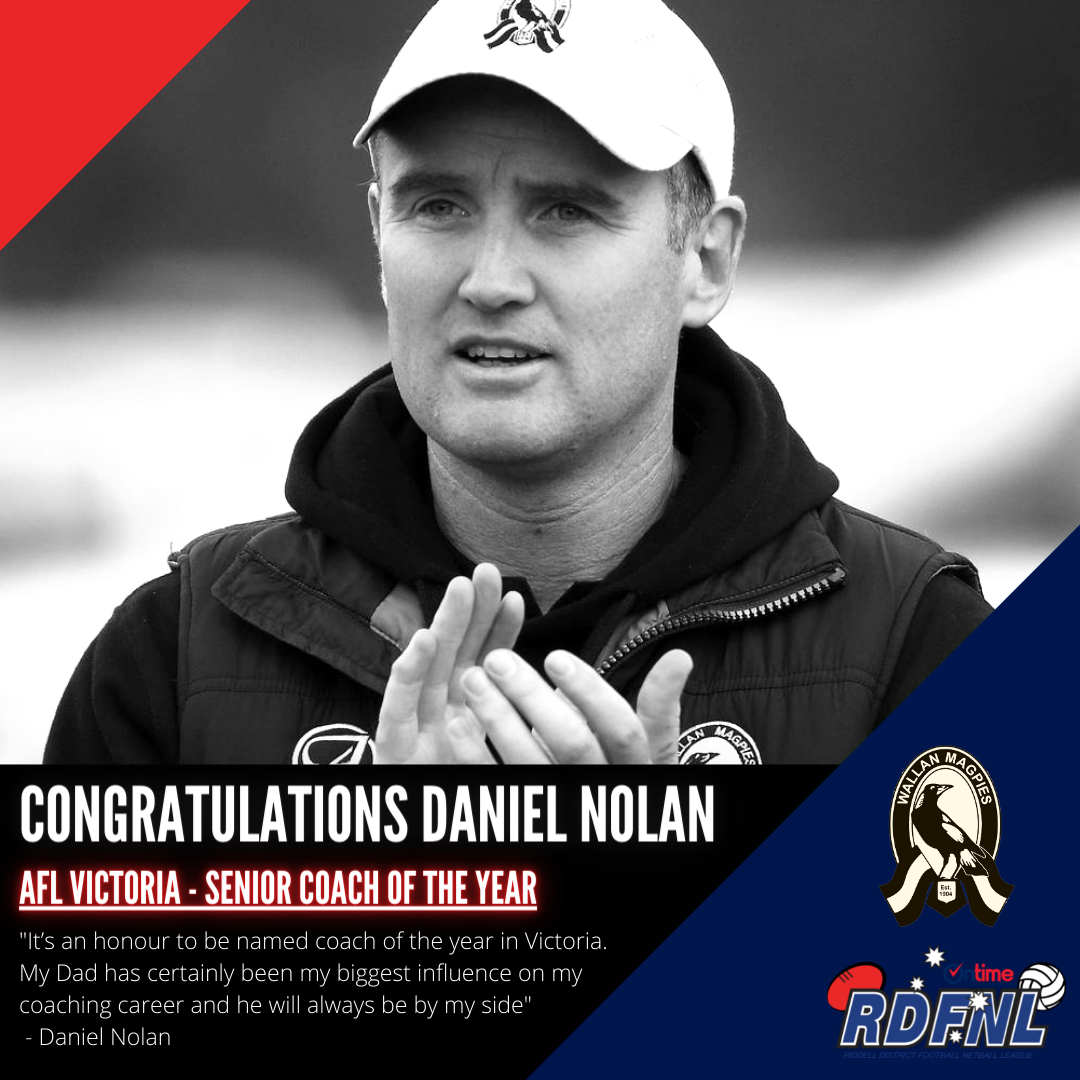 Daniel Nolan has been awarded the Victorian Senior Coach Of The Year as one of eight Victorian category winners of the Toyota AFL National Volunteer Awards that were announced this week.

The nation awards take place in an effort to recognise the supporters of Australia’s game from grassroots to the elite.

Nolan in his sixth year with the Wallan FNC has provided the club with great results on and off the field.

Nolan was proud of the achievements after what has been a challenging year.

"It’s an honour to be named coach of the year in Victoria. I’m lucky enough to have an amazing coaching Department & leadership group at Wallan." Nolan Said.

"My Dad has certainly been my biggest influence on my coaching career and he will always be by my side."

"Hopefully next year Wallan can break the club's premiership drought. We have been building for 6 years and now have a strong culture and environment."

Nolan has always been a big supporter of the league and is a great coach to work with.

"Daniel is a deserving winner of the Senior Coach of the Year for Victoria," he said.

"Since Daniel joined Wallan FNC and the RDFNL, he has taken the club from strength to strength. Congratulations to Daniel on this wonderful honour."

When the award was announced the following was published on the AFL Victoria Website.

"Match day is an extension of training for Daniel and his team. His approach in pre-match, and at each quarter break is very articulate with clear messages as to what is expected. Daniel empowers the leaders in the team to take control of the warm-up and various line group meetings. Daniel uses statistical information and examples of occurrences in the quarter to communicate with players and engage with players at each quarter break. Daniel communicates the match day schedule prior to the game, communicates very clearly the role of players individually, the game style being played in offence and defence, the structures being employed for any given day to support that style, and the KPI’s of focus for each given game critical to a good result. Whilst Daniel's team wins regularly, each match is really a live training session for each player. Daniel spends time at each quarter break with players prior to heading into a team address. With a Secondary level teaching background, Daniel uses a range of techniques to educate, develop and motivate his playing group. The positive for the group is Daniel's "Team First" philosophy and shows repeatedly that the team functions on system, not individual talent. This enables the players to buy in and believe in this approach, so when Daniel is able to use players in a number of different roles for their development, they see the team continues to function consistently and not be reliant on any one player playing a certain role."